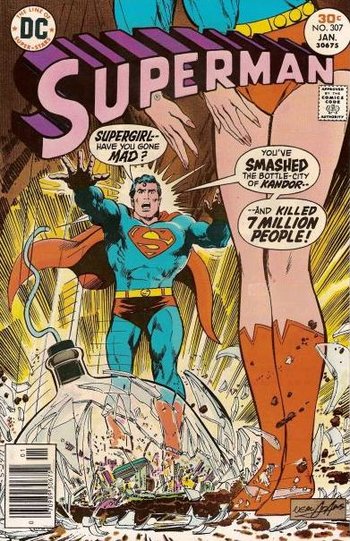 Face it, Clark — you've been ill! You created the whole Krypton fantasy to escape the reality of your life — a reality you couldn't face!
"I thought we'd come to this someday! Well, now that we have, I've got to tell you, Superman — There is NO planet Krypton! Moreover, Clark — There never WAS!"
— Supergirl
Advertisement:

Superman's Survivor Guilt and issues of loss and isolation are aggravating, placing him under tremendous stress and on the verge of a mental collapse. Fearing pollution could destroy the Earth, and unwilling to lose another home planet, Superman goes on a rampage, destroying real or perceived environmental threats.

However, his cousin Kara Zor-El/Linda Lee Danvers alias Supergirl stops him before he destroys a supertanker. Supergirl tells Superman that he cannot make decisions for humanity, he cannot interfere with mankind's evolution… and his memories of Krypton are a lie. Krypton, she explains, never existed, and both she and he are only powerful human mutants who were born on Earth.

Supergirl's words cause an upheaval in Superman. Is Supergirl telling the truth? Is he mourning a world he never lost and a heritage never existed? Does he have a home and belong with humans after all? And maybe he should prioritize helping the Earth people and concerning himself only with local crime instead of traversing the galaxy?

As Superman is trying to figure things out, the coming of two new super-villains and an Alien Invasion will make his life harder.

Krypton No More provides examples of:

I love this world, Supergirl... as much as I ever loved Krypton! Perhaps, in certain ways, I love it more... because it adopted me when I was lost and alone! It made itself my home, when I had no home! It gave me life... when my life could have been over! If I'm obsessed with Earth, it's not because of Krypton — It's because of Earth, my home!