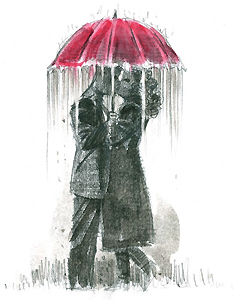 Back in the day, it was not seen as kosher for a young woman to be seen in public with a man who was not a family member. One exception was during a rainy day when a man could offer to share his umbrella with a young maiden in the street if she hadn't one herself.

It is a romantic image in media all over the world—but it doesn't quite have the iconic "oomph" to Westerners that it does in Japan, where this trope is known as aiaigasa (相合い傘). The word literally means "sharing an umbrella", but it is also a Pun for "love-love umbrella" (愛愛傘). The Japanese equivalent of the "Alice [arrow through heart] Bob" love graffiti is drawing the pair's names standing under an umbrella. This one is rooted in Shinto weddings, where newlyweds are officiated under a red umbrella