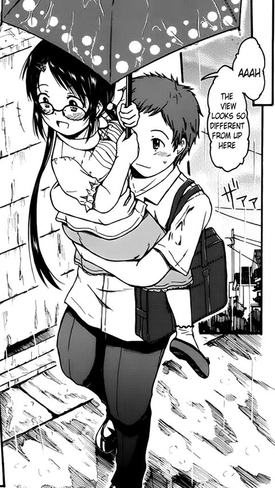 Be warned, their oh-so-sweet lovey-dovey newlywed life might give you heartburn.
—Chapter 3 blurb.
Advertisement:

Sachiare! is a manga by Ooshiro Youkou, the author of Koharu No Hibi.

Tomoharu Yotsuba is an 18-year-old high school senior, and newly married... to a 25-year-old. However, his blushing bride Sachiko is so short and cute she actually looks younger than him. This is the epic, tragic saga of their tumultuous, star-crossed... ah, who are we kidding here? This is a Slice of Life story of an innocent couple who are blissfully in love with each other and can get adorably embarrassed about it.

And what more do you need?