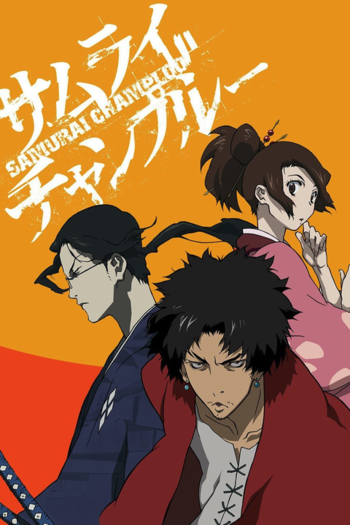 Clockwise from front: Mugen, Jin, Fuu.
This work of fiction is not an accurate historical portrayal.
Like we care.
Now shut up and enjoy the show!
— Opening disclaimer
Advertisement:

Samurai Champloo is an anime series created by Shinichiro Watanabe (of Cowboy Bebop fame) and produced by Manglobe, their first series.

The show is set in a Schizo Tech version of Edo period Japan (specifically the Bakumatsu era), featuring elements of action, adventure and comedy blended with a soundtrack predominantly rooted in hip-hop. The animation is often extremely dynamic, with a focus on highly choreographed action sequences.

The story begins when three people happen to meet during a brawl at a teahouse: a brash vagabond called Mugen, a stoic Rōnin called Jin, and a young waitress named Fuu. Mugen and Jin are outstanding swordsmen who consider each other Worthy Opponents and just want to duel it out, but Fuu manages to rope them into her own personal quest to find a mysterious samurai who "smells of sunflowers". And so the unlikely trio begin a journey across Japan, encountering dangerous enemies, dark secrets and extreme oddities along the way.

Since the three main characters don't care about each other's lives in any meaningful way, they tend to remain entirely oblivious to each other's plotlines over the course of episodes and arcs — often until it's too late. The episodes are typically self-contained, and the show has an extensive cast. Apart from the main trio, though, most characters only appear once or twice; rarely more than three times.

The show matches traditional Japanese culture to hip-hop music with a stylized form of samurai swordplay known as chambara, much in the same way Cowboy Bebop married Science Fiction to blues and Jeet Kune Do. Champloo's soundtrack features hip-hop instrumentals by artists such as the late Nujabes, Force of Nature, Tsutchie, and Fat Jon among others. It also features many traditional Japanese songs, accompanied by shamisen music.

The world of Samurai Champloo is deliberately anachronistic. Characters' costume design and attitudes, and the show's editing methods reflect heavily towards international hip-hop culture. Mugen fights in a style that resembles both Capoeira and breakdancing. Also, despite its alleged setting in the Edo period (though with a wild mixture of historical events

), many of the expressions used by the characters are modern slang or English-influenced.

Regarding its storytelling and underlying themes, many elements of the show stem from modern-day insights on the human condition as put through the unyielding taskmaster known as hierarchy, making for a juxtaposed drama comparing how life is not so much different as it was back in the old days. Be it from government corruption, class separation, discrimination, advantageous abuse, and the criminal life, Fuu, Jin, and Mugen come to face some of the more unwholesome aspects of the Tokugawa Era brought to light, all while surviving its strict rules on society.

The show's name comes from the Okinawan word "chanpurū" (e.g. goya champuru), which means to mix or blend. Thus, the title may be translated as "Samurai Remix" or "Samurai Mashup", keeping with the series' blended theme.

Most likely due to the popularity of Cowboy Bebop, it was licensed for North American distribution nearly a year before it even aired in Japan. The show can now be viewed on Hulu

A PlayStation 2 game, Samurai Champloo: Sidetracked was released after the show aired. It was developed by Suda51's Grasshopper Manufacture, written and directed by Suda himself, and had a plot mostly unrelated to the events of the show outside of characters and mood.

For another, darker, take on this theme, see Afro Samurai.