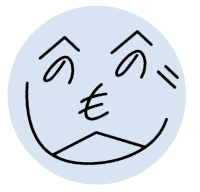 A face drawn with the hiragana characters he no he no mo he ji (へのへのもへじ). Conveys an idea of anonymity, and may be worn as a mask.

In Real Life, Henohenomoheji are also sometimes drawn on the little dolls hung on windowsills to chase away the rain, known as Teru-Teru Bōzu.