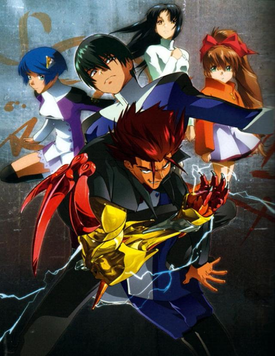 "Come on now...give it your best shot! Maybe then it'll be a real battle! SO GET OFF YOUR ASS AND FIGHT ME!!!!"
—Kazuma
Advertisement:

A massive disaster hits Japan, separating a section of Tokyo into a new island known as the "Lost Ground". The disaster also causes 1% of the babies born there to develop superpowers. Now, before you pass this off as your standard Mutant story, remember that this is anime: Instead of being born with powers such as quick healing, reading minds or controlling magnets, the "Alter Users" have the power to call upon and use mecha in battles. By dismantling nearby matter—areas of landscape, vehicles, watermelons, or even dead bodies—and reassembling it, they can summon separate, machine-like beings known as Alters, which personify a superpower of some sort.

Broadcast in 2001, s-CRY-ed was produced by Sunrise and developed by Goro Taniguchi who wanted to make a show with an alternate take on the themes explored in Infinite Ryvius as well as how people would adjust to the 21st century. The series was originally licensed for American distribution by Bandai Entertainment, releasing DVD sets through 2003 and 2004, alongside select episodes appearing on Adult Swim's video-on-demand service through 2004 until the full series was run on the channel itself in 2005. After Bandai Entertainment's closure in 2012, Sentai Filmworks picked up the American distribution rights. However, they never released the series on DVD or Blu-Ray, and eventually the license was picked up