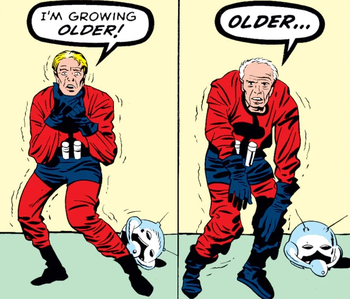 Short hero, shorter lifespan.
"[placing a hex on his victim] Tout, tout, through and about, your callow life in dismay. Rentum, Osculum, Tormentum. A decade twice a day."
— The Warlock, Warlock
Advertisement:

A trope used when a character undergoes aging more quickly than normal. It can occur anywhere from a matter of seconds to a matter of weeks.

Sometimes as a result of using evil (or sometimes merely questionable) means to preserve youth, or from an encounter with a dark force that causes immediate aging and deterioration, usually resulting in death soon after. This also isn't unheard of when leaving a Year Outside, Hour Inside setting. Frequently caused by a villain's own mistake or overreaching. Sometimes it happens to the good guys, in which case their comrades must Find the Cure! before it's too late.

If this is used to age a character from infancy or childhood to adulthood, expect that more often than not the work in question will completely ignore the fact that they should have to consume food in order to gain body mass as they grow up or else be stunted; instead, aging will somehow make them grow in size, too, and the extra mass will come out of nowhere in violation of the laws of physics.

If someone was using a Fountain of Youth that was destroyed, expect this to happen as they immediately become whatever age they should be. Not to be confused with Soap Opera Rapid Aging Syndrome, a tragic affliction that affects hundreds of characters in daytime Soap Operas a year, usually so as to avoid the hassle of children in the cast or in the plot. Contrast We Are as Mayflies or Time Abyss. Usually a result of Cast from Lifespan, sometimes a result of Clone Degeneration. See also Plot-Relevant Age-Up. Rapid Hair Growth might ensue.

Note that the effect tends to be hard to justify in a strictly science-fictional setting. Hair, in particular, is essentially dead tissue; the grey or fine white hair that we associate with aging appears as old hairs grow and fall out, and new hairs grow in.