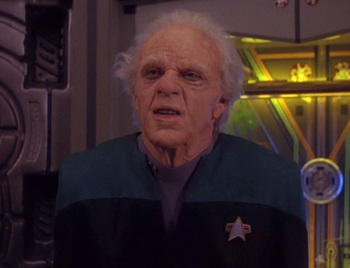 Bashir and Garak are having their typical lunch together on the promenade, and Bashir is a tad grumpy. As Garak finds out, the good doctor is turning the dreaded 3-0. Garak doesn't see what the problem is, since Cardassian culture sees growing old as a sign of power. Bashir tells Garak that he simply doesn't like being reminded that he is getting older.

In the middle of their discussion, a clearly nervous Quark approaches with a menacing Lethean named Altovar. He's looking to purchase some bio-mimetic gel... which is a restricted substance that's banned from purchase. When Bashir informs him of this, Altovar storms off.

Returning to sick-bay, Bashir finds Altovar ransacking his medical supplies. When Bashir tries to stop him, he gets a psychic shock to the noggin and passes out on the spot.

Waking up, Bashir discovers that his whole office is on the fritz and his temples have suddenly started to grey. Venturing out into the promenade to see what's going on, the doctor finds the station void of life. He can't contact anyone, and the computer appears to be down. Wandering into Quark's, he discovers the barkeep cowering behind his counter. A mysterious figure in the shadows is trashing the place. Quark bolts from the scene, leaving Bashir alone again.

After getting some chairs thrown at him from the darkness, Bashir leaves the bar and heads for the security office. He finds Garak, who isn't able to provide much more information about what's going on. The Cardassian notices Bashir's hair is even grayer than before. To top it off, Bashir is hearing faint voices in his head.

Heading down a random corridor, the lights begin to go out one by one. Bashir breaks for the nearest turbolift, and encounters an angry Altovar, but the doctor escapes courtesy of a swift kick to the face.

Things seem on the up as Bashir finds Dax, Kira, O'Brien and Odo huddled in the wardroom, but they're all acting very out of character. O'Brien is cowardly, Odo is more paranoid than usual, Dax is itching to fight an enemy, and Kira is acting especially sharp. They note that Bashir appears to have aged 30 years, and they're not at all pleased to learn that he's hearing voices. In spite of it all, they formulate a plan to get communications up.

When O'Brien completes the repair, they pick up something. It sounds like a conversation between Dax and Sisko, talking about how Bashir is comatose and has hours to live. Bashir realizes that Altovar's attack put him in a coma, and everything he's experiencing is in his head. If he doesn't figure out a way to wake up, he'll soon die.

Bashir's crew are understandably incredulous about being figments of Bashir's imagination. He deduces that each of them represent an aspect of his personality. And just like that, Altovar appears out of nowhere and drags Dax off. Bashir goes to bang on the door... and finds himself playing tennis on the promenade with Garak. In his 80s by now, Bashir heads off with Garak to try and fix his brain by fixing the station.

Bashir happens upon Sisko, who is treating injured patients, representing Bashir's professionalism. Sisko agrees to help Bashir, but barely takes a step before Altovar drags him away through a wall. Kira, Odo, O'Brien and Quark are all dispatched as well, leaving Bashir with no allies... except Garak. After breaking his hip, Bashir convinces the Cardassian to help him to Ops, where Garak throws him a surprise birthday party.

Bashir brushes aside the festivities and tries to restart the computer, but the consoles are filled with tennis balls, much to Garak's amusement. At his wit's end, Bashir finally questions Garak on what he represents and discovers that he's actually Altovar in disguise. Altovar confronts Bashir on his weaknesses, reminding him that he abandoned his dream of being a tennis player to appease his parents and has never been able to seal the deal with Dax. He also accuses Bashir of purposefully botching that one question on his final exam so that he wouldn't feel the pressure of being first in his class.

Bashir counters that he loves being a doctor, he treasures his friendship with Dax, and he would have chosen to serve on DS9 even if he had graduated first, so nothing Altovar said really matters. He completes his repairs to the computer and vaporizes Altovar.

Bashir awakens in sick bay none of the worse for wear. In his next lunch with Garak, he announces that after aging so rapidly in his mind, turning 30 is not so bad after all.