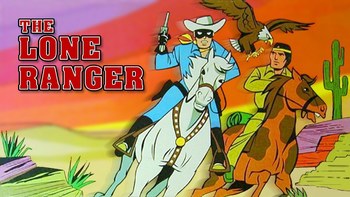 When the factories first began to send their pall of smoke over the cities, and farmlands of the East offered only the barest living, Americans turned their faces toward the West. They poured into the new territory by the thousands—fording the mighty rivers, climbing the mountains, fighting Indians and outlaws—praying...toiling...dying.
It was a hard land, a hostile land. Only the strong survived...a new American breed—the pioneer.
Advertisement:
In this forge upon this anvil was hammered out a man who became a legend...a daring and resourceful man who hated thievery and oppression.
His face masked...his true name unknown...with his faithful Indian companion at his side, he thundered across the West on his great white stallion, appearing out of nowhere to strike down injustice and outlawry...and then, vanishing as mysteriously as he came.
His sign: a silver bullet.
His name: The Lone Ranger!!!

Running for three years from September 10, 1966, to September 6, 1969 on CBS, the 1966 Lone Ranger cartoon series was the first Animated Adaptation of The Lone Ranger, produced by Herb Klynn and Jules Engel of Format Films, Hollywood, and designed and made at the Halas and Batchelor Cartoon Film studios in London, England & Artransa Park Studios in Australia. It spanned 26 episodes, most of which were made up of two or three separate mini-episodes of about 6 to 7 minutes in length.

The animation was limited. But the backgrounds had a dark style, with blocks of color elided from the line, which visually set the show apart from many other cartoon TV series of the time. The distinct atmospheric music was composed by Vic Schoen, who also provided the powerful arrangement of Gioachino Rossini's William Tell Overture for the show's memorable opening sequence. Along with the Halas and Batchelor animators, the background department, led by Tom Bailey, Ted Petengel and designer Chris Miles, were responsible for setting the graphic style. The drawings were produced by chinagraph pencil on cell. Colored papers were cut or torn under or against the lines of the background, producing a dramatic and rich textural effect.

This series is most notable for its distinctive Cattle Punk take on the Lone Ranger's Wild West, possibly inspired by CBS' earlier series The Wild Wild West. Many stories revolve around Steampunk level technology or pulp-inspired stories.

Tropes present in this animated adaptation include: