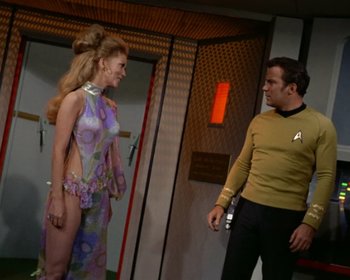 See? The camera is tilted. That means something wonky is going on.
Advertisement:

The Enterprise answers a distress call from planet Scalos, only to find there's no one there. No life forms detected, though there are signs of a great civilization- and a strange buzzing sound, though not even insect life has been detected. Then Crewman Compton breaks rule one of visiting a foreign land. "Don't drink the water!" However, instead of getting a case of Montezuma's Revenge, Compton just vanishes into thin air. Don't worry, this Red Shirt isn't dead...yet.

The rest go back to the Enterprise to find that the life support system has been infiltrated and surrounded by Some Kind of Force Field. Kirk, Spock and two Red Shirts investigate. Said force field refuses to let anybody but Spock and Kirk near. The Red Shirts breathe a sigh of relief as Kirk and Spock investigate. They don't learn much as it seems whoever is letting them in will allow them to look at the system, but not touch.

A crewman is missing. The life support system is being threatened. There's an annoying buzzing sound in the air. What's a captain to do? Why, have a cup of coffee, of course!

And that's when Kirk's troubles start getting really strange...

Wink of a Trope: