Nothing Up My Sleeve 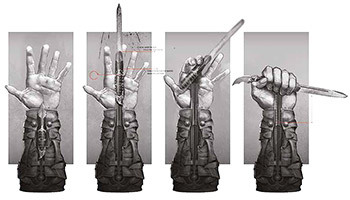 A character will have a weapon hidden in his sleeve. Occasionally extracted by a device attached to his arm that will eject the weapon into his hand when the situation calls for it; this can overlap with Blade Below the Shoulder.

Typically it's a knife, throwing star or a Little Useless Gun, though there are other options. This is especially likely if they have sleeves obscuring their hands.

Westerns, such as Louis L'Amour novels, use the gun version occasionally. Often called a "palm gun", a "sneak gun", a "gambler's gun", "gambler's draw", etc. This type of weapon was common among Mississippi riverboat gamblers. Derringers were the favourite as you really can hide one up your sleeve. Western or Film Noir Femme Fatales are often armed with this type of gun as well as, or instead of, a Chastity Dagger.

Sometimes the sleeve is a good way to access Hammerspace. If you find yourself wondering how the object being removed could possibly fit inside a sleeve, you know Hammerspace is involved. Shots where the weapon is revealed are often framed as a Menacing Hand Shot.

A knife in the boot is another variant. Anyone paranoid enough to have this many spare weapons is almost certain to have another one under their pillow and yet another by the bathtub.

The title is a common line for a Stage Magician, as a way to assure the audience that he has no hidden devices that would help him perform the trick. Don't expect characters hiding a weapon to say this line unless Hammerspace really is involved.

Not to be confused with Floating Limbs, although the two could potentially be used simultaneously in order to create more space. Subtrope of Hidden Weapons. May involve Cute Oversized Sleeves to hide a weapon under overlength sleeves, while the character appears cutesy. Compare Combat Haircomb.