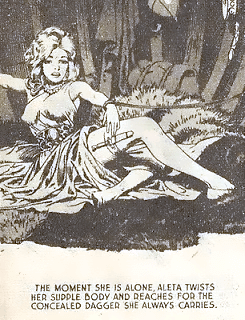 "Unappalled by the calm dignity of blameless womanhood, your minion has torn me from my spotless home, and dragged me, blindfold and shrieking, through hedges, over stiles, and across a very difficult country, and left me, helpless and trembling, at your mercy! Yet not helpless, coward sir, for approach one step — nay, but the twentieth part of one poor inch — and this poniard shall teach ye what it is to lay unholy hands on old Stephen Trusty's daughter!"
— Dame Hannah, Ruddigore
Advertisement:

The villain has cornered a beautiful maiden! Trembling at the very thought of his touch, she tearfully lifts her skirt, things look bad — but what's this? She's pulled a knife from her garter! Before he can react, she stabs him, stopping the Attempted Rape and possibly putting an end to his evil ways once and for all.

The Chastity Dagger is the favored weapon of delicate young ladies in fantasy and historical works. It is almost always used as a means of self-defense when in danger of being raped, robbed or kidnapped, but a Femme Fatale may also use it in conjunction with her feminine charm to assassinate a male character while he is distracted. A more modern variation is the Little Useless Gun.

An inversion almost as common as the trope itself is when the knife is like a Cyanide Pill for suicide rather than self-defensive — averting Fate Worse than Death and invoking Better to Die than Be Killed.

For a fantastic, Body Horror variation, see Vagina Dentata. Though it should be noted that that trope is almost never used in applying this trope, unless it's part of a Karmic Death or Mugging the Monster situation meant to introduce the real Monster of the Week.

Agamemnon may think he has Briseis as his sex slave, but she came prepared.

Agamemnon may think he has Briseis as his sex slave, but she came prepared.