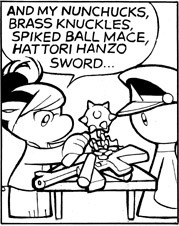 A character is told to drop all his weapons, or is frisked. He lays down the shotgun, takes the pistol or pistols out of their holsters, and drops them onto the ground. Then the gun from the shoulder holster... the smaller concealed pistol in the ankle holster... the extra magazines... the hunting knife from his belt... the combat knife strapped to his leg... the switchblade... the tear gas... the butterfly knife... the grenades... the shuriken... the poleaxe... the bazooka...

Yes, in comedy it always escalates until it ends with a bazooka, or an RPG, .50 cal machinegun, chainsaw, surface-to-air missile or something else large and improbable. This clearly comes from Hammerspace; if we see where it comes from, it's always pulled out of the inside of the pants. On rare occasions, it'll end with something tiny like a slingshot.

Quite often, the disarmed character will have one more small weapon they kept concealed on their person anyway, secure in the fact that with the large number they gave up already, nobody would even think that there was more.

In more serious situations it can go one of two ways.

The baddies' look of horror grows more pronounced as a deadly little pile is built in front of them. We look on in amusement or incredulity. Occasionally, the Disarmer will give the disarmed a certain look, usually with a raised eyebrow. The supposedly disarmed will then give up the rest of his weapons, which is usually just as large a pile as the pile already on the ground.

If it's a relatively serious show, this is often used to boost a character's badass quotient. If it's a comedy, it's often used to highlight someone's Hyperspace Arsenal. Though usually restricted to comedy or comic scenes, a character whose Extended Disarming reveals that they are a badass killer with a vast array of small, realistically-concealed weapons can make for a moment of squirming unease; particularly when they inevitably recover their former arsenal.

It doesn't necessarily have to include hammerspace or unlikely materials, either. Having a dozen and a half realistically concealed weapons on one's person, especially if they had up 'till then appeared to be unlikely to carry any weapons, certainly counts.

The reverse of the Lock-and-Load Montage. Unavoidable when you're a Walking Armory. Not to be confused with Fake Arm Disarm. Often a subtrope of Overly Long Gag. May happen at a Metal Detector Checkpoint.

"Return of the Mandalorian". A security droid blocks Din Djarin from boarding a passenger liner to Tatooine unless he checks his weapons. Din is forced to hand over his sidearm, and his grenades, and his wrist rockets, and the Darksaber, and his vibroblade...

"Return of the Mandalorian". A security droid blocks Din Djarin from boarding a passenger liner to Tatooine unless he checks his weapons. Din is forced to hand over his sidearm, and his grenades, and his wrist rockets, and the Darksaber, and his vibroblade...