Film / Nuns on the Run 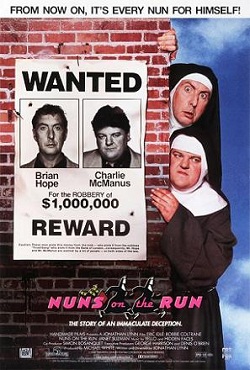 Says it all, really. Quite blasphemously, too.
Charlie: This is our only chance to go straight!
Brian: You call this going straight?
Advertisement:

Brian Hope and Charlie McManus are two gangsters unhappy with their new boss. But their new boss has also made it clear that death is the only way out, and they wisely deduce he is going to kill them anyway. So they decide to take for themselves the money they steal in their latest job, and run off.

But Brian forgot to fill up the tank enough to get to the airport, so they are forced to hide the money, and themselves, for the time being... and the closest place is a nunnery. So they temporarily become Sister Inviolata of the Immaculate Conception and Sister Euphemianote not that Euphemia of the Five Wounds, while trying to find a way to get out of the country safely, and deal with Faith, Brian's girlfriend who witnessed their crime.

This 1990 comedy was directed by Jonathan Lynn and stars Robbie Coltrane and Eric Idle. It was the last film produced by George Harrison's Handmade Films.

"Tropes on the Run":