Film / The Object of My Affection 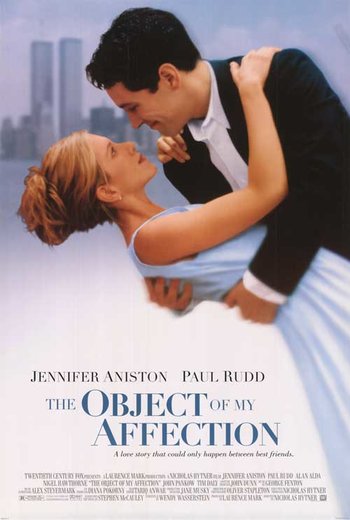 The Object of My Affection is the name of a 1987 novel by Stephen McCauley and its 1998 film adaptation. The film was a Romantic Comedy, exploring the concept of Incompatible Orientation. It was directed by Nicholas Hytner, previously known for film adaptations of The Madness of King George (1994) and The Crucible (1996). The main stars were Jennifer Aniston and Paul Rudd.

The film starts by introducing its main characters and their respective occupations. George Hanson (Rudd), a first grade teacher at a private school, is making the opening remarks before the class play, whose cast includes the step-niece of Nina Borowski (Aniston). George is openly gay, currently in a relationship with Dr. Robert Joley (Tim Daly), a professor and biographer of George Bernard Shaw. Nina is a social worker, currently employed as a teen counselor at a community center in Brooklyn. She is seen giving advice to teenage girls about their sexual lives, cautioning them against promiscuity by telling them, "If I had sex with a guy, I'd want him to be my friend." She is in a relationship with Vince McBride, a lawyer for the Legal Aid Society (the largest not-for-profit legal services organization of the United States) and a rather overbearing individual.

George and Nina meet after the school play, at a society party hosted by Nina's stepsister Constance Miller (Allison Janney) and her husband Sidney (Alan Alda). Nina has been looking for a roommate. Joley apparently put on a good word for George, explaining that he would soon need a new apartment. George is shocked to only learn that from her. It is his lover's not so subtle way of telling him that he is kicking him out. Joley is leaving him for a younger man, one of his students. George does move in with Nina. They spent much of their free time together, even taking dancing lessons. Also talking about his personal history. In particular, how he used to date a girl in high school and only discovered his orientation when at college. Nina continues sleeping with Vince, and becomes pregnant with his child, but is falling hard for George.

Nina and Vince have an argument and end their relationship, but she decides to continue her pregnancy. Not wanting to raise her child alone, her first thought is to turn to George and ask him to raise a kid together. He is tempted because it might be his only chance to become a father. George and Nina form a strong emotional bond, strong enough that, on one occasion, they kiss, only to be interrupted by a phone call from Joley, who wants to reconcile with George. The two men travel to an academic conference together, with George uncertain as to whether they should resume their relationship. While at the conference, George meets actor Paul James (Amo Gulinello) and falls for him, putting a strain on his relationship with Nina. The two have to sort out the mess before the birth of the baby.