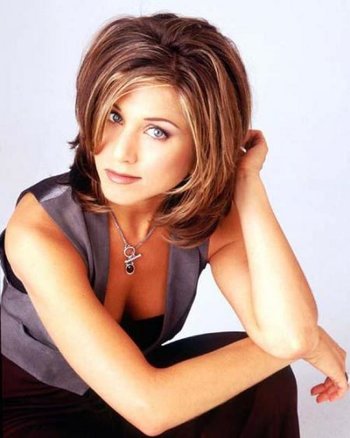 Her famous '90s hairstyle from Friends that launched a million imitators...but her lack of flair leaves something to be desired.
"I was told to avoid the business all together because of the rejection. People would say to me, 'Don't you want to have a normal job and a normal family?' I guess that would be good advice for some people, but I wanted to act."
Advertisement:

Jennifer Joanna Aniston (born February 11, 1969) is a Greek-American actress famous for playing Rachel Green on Friends in 1994. She has been romantically linked with several male actors, most famously Brad Pitt, to whom she was married from 2000 to 2005. She has starred in several Romantic Comedies since the end of Friends in 2004.