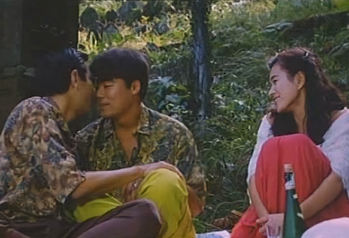 Freddie: You're lucky you're straight Ash, otherwise you get one of these women who latch on to you for decades and never let go.
Ash: But you love her?
Freddie: Yes. We like her.
— Vicious
Advertisement:

A Fag Hag is a woman who associates closely with gay men. The term used to be an insult but is becoming increasingly adopted by the women themselves. Friendships between Fag Hags and gay men allow for closeness and intimacy without the danger of sexual feeling getting in the way.

Fag Hags are stereotypically portrayed as overweight. At best, she's a classy BBW; at worst, she's a neurotic drama queen who is either promiscuous or perpetually single. In many cases, the Hag started hanging out with her gay friend because she was attracted to him, before he turns her down for obvious reasons (wishful thinking will ignore even the most Flamboyant Gay characteristics). The friendship lasts however, and some Fag Hags even seek out gay men — either because they find them non-threatening or as a replacement for a 'proper' straight relationship. Gays who enjoy the company of these ladies do so for similar reasons, but it isn't uncommon for a gay man to see his Hag as a sort of maternal figure, especially if she's older than him and/or if his own mother rejected him. A Hag who acts as a mother figure to a group of gay men is sometimes called a "Wendy" — because she takes care of the Lost Boys.

This trope has been heavily stereotyped in Real Life on all sides. A woman with a gay friend at all is often called a Fag Hag even if they simply enjoy each other's company with no ulterior motives. Some women, however, see all gay men as possible Pet Homosexuals, even though the men in question might find this patronizing. And lastly, by no means do all gay men enjoy female company; at best, some simply get along better with other men, and at worst they can be as misogynistic as a stereotypical straight male misogynist.

Some women resent the name "Fag Hag" for multiple reasons including the misogyny that comes along with the term and are rather referred to as "Fruit Flies", "Mo Hos", "Gay Boy Bunnies", "Alternative Lifestyle Assistants" or something along those lines. The Japanese equivalent of this phrase, Okoge, literally means "the rice stuck to the bottom of a pot", playing off of Okama (literally, a type of pot for cooking rice), the slang term for homosexual men and drag queens. In German, it's "Schwulenmutti". Some people, including gay and straight, eschew terminology altogether and simply enjoy their friendships for what they are without the need to put each other down or classify each other in a derogatory way.

The equivalent for a man who hangs out with lesbians is a Lez Bro (or Dyke Tyke or Little Dutch Boy - think about it), but they're not quite as common in Real Life or pop culture. Fag Stag, a Token Straight man in a group of gay men, is slowly becoming more used, but nowhere near Lez Bro levels, let alone Fag Hag.

Compare Yaoi Fangirl. The Gay Best Friend can be an inversion if it's a gay man whose friends are almost entirely straight women. See also Last Het Romance, where the woman may become a Fag Hag in response to her partner outing himself.