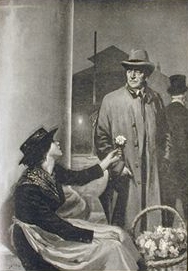 Pygmalion (full title: Pygmalion: A Romance in Five Acts) is a 1913 play by George Bernard Shaw.

We open on a crowd sheltering from the rain in a church porch. Among them are an impoverished aristocratic mother and daughter, the Eynsford-Hills (who dispatch Freddy, the son of the house, to secure them a cab); Colonel Pickering, a student of Indian dialects; and Professor Henry Higgins, a professional linguist. These are joined by Eliza Doolittle, a Cockney flower-girl (nearly knocked over by the departing Freddy), whom Higgins repeatedly startles, first by taking down her speech in phonetic writing, then by declaring to Pickering (whom he has invited to his home) that he could teach her to speak proper English, and finally by presenting her with a great deal of money — which she uses to commandeer the taxi which the feckless Freddy has brought for his already departed family.

Eliza, inspired by Higgins' boast, comes to his house for lessons. Pickering makes a wager with Higgins, that the latter must in six months' time pass Eliza off as an aristocrat at an Embassy Ball. To effect this, Higgins bullies and wheedles Eliza into remaining at his home. Eliza's dustman father, Alfred Doolittle, gets wind of this and comes to extort money out of Higgins — which Higgins, delighted by Doolittle's charmingly amoral manner, gladly gives him. Eliza's lessons duly proceed.

Sometime later, Higgins brings Eliza to his mother's At Home day to try her out on Society; Mrs. Higgins's guests just happen to be the Eynsford-Hills. Eliza's conversation, though conducted in a properly aristocratic accent, is thoroughly low-class in grammar and content. Hilarity Ensues, as Eliza departs with a shocking vulgarism, leaving Freddy frankly in love with her and his sister determined to emulate Eliza's elegant "small talk." Higgins's mother remonstrates with him, to no avail.

Months later at the ball, Higgins and Pickering present Eliza to the scrutiny of the venal language expert, Nepomuck, who has been charged by the hostess with detecting any social frauds. Because of his language expertise, Pickering is certain that Eliza will be seen right through. Nepomuck thoroughly deceives himself, however, identifying Eliza not only as an aristocrat, but as a foreigner as well; even when Higgins himself identifies her as a Cockney commoner, his Cassandra Truth is not believed.

With the ball over — What now? Eliza's new character has unfitted her to be a flower-girl and left her financially unable to maintain her character as a lady. The rest you'll have to see yourself. (And even that might not answer your questions, so you may have to read the "Afterward" Shaw appended to the play after he first wrote it.)

A well-received film version was shot in 1938, directed by Anthony Asquith and starring Leslie Howard and Wendy Hiller. Shaw adapted his own play and won Oscar for his script.

It created the modern Pygmalion Plot and directly inspired My Fair Lady.