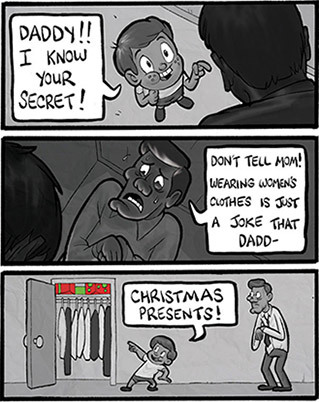 "Dealing with a blown cover is about stalling for time. Stay alive long enough to figure out what they know, and tell a bigger lie to save yourself."
— Michael Westen, "Family Business", Burn Notice
Advertisement:

Keeping Secrets Sucks. It's deceitful, it's difficult, and it's stressful. Especially when you think someone's found you out. If you've cheated on your spouse, and they tell you, "I know what you did," what do you do? Do you confess everything immediately and hope for forgiveness? Do you deny everything? Do you play your cards close to the chest and hope to bluff your way through it?

This trope tends to play out in one of two ways.

Oftentimes, when Alice thinks she's been found out, she'll immediately confess, or she'll be so distraught that she'll reveal herself by being so obviously upset that Bob will realize she must have done something even worse than what he knows about. On the other hand, if Alice is smarter, she'll deny everything until it becomes explicitly clear that Bob knows exactly what she did, or she'll just play her cards close to the chest and not confirm or deny anything until she knows exactly what Bob is referring to (as in the page quote). This trope can also be in play if the accuser actually does know what the accused is hiding, or if it's never made clear whether they know, but the defining factor is that the accused (A) isn't sure and tries to bluff their way out of it, or (B) panics and reveals themselves, rendering it irrelevant whether the accuser knew beforehand.

Hey, Wait! is a specific Sub-Trope involving guards or authority figures—see that page for a more in-depth description. Also compare Cat Scare, which has similar overtones of a buildup of tension only to see that there was nothing to fear all along (but bear in mind that in some rare cases of Bait-and-Switch Accusation, the accuser really does know what the accused is hiding). A Sub-Trope of Bait-and-Switch, and also of One Dialogue, Two Conversations. Usually involves a Suspiciously Specific Denial and frequently overlaps with Sure, Let's Go with That if Bob plainly states his incorrect suspicions and Alice goes along with it to maintain the secret. If someone in the cast does find out but plays along with the lie, it's Pull the Thread. You Know What You Did is a Stock Phrase that appears in a closely related situation. If the character falls for the bait-and-switch and lets their secret out that's You Just Told Me.

Ja'far warns the Princess about the dangers of Princes and their songs.

Ja'far warns the Princess about the dangers of Princes and their songs.