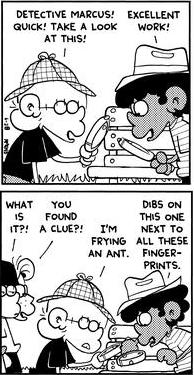 Never trust those ants, I always say...
Rich Woman: Someone has broken into my safe!
Detective Dan: (Examines safe) Lucky for you this safe is empty.
— All That
Advertisement:

There is a crime, and the detective is trying to solve it. They're just abysmally bad at it, whether out of stupidity, or just because they don't have The Gift. They always get everything wrong, and if it wasn't for other people, they would never solve a single case. Often used to lampshade how the real detective is frankly just making Ass Pulls.

If they're just trying to solve an entirely different case and accidentally succeeding at foiling an actual criminal scheme, it's just Inspector Oblivious at work. Not to be confused with Defective Detective (though cluelessness might apply to his personal life). Compare Clueless Deputy and Inspector Lestrade (who is only clueless at putting the pieces of the puzzle together). If this trope is invoked as a way of getting suspects to lower their guards, see Obfuscating Stupidity.

Nothing to do with a Clueless Mystery, which just doesn't let the audience figure it out.