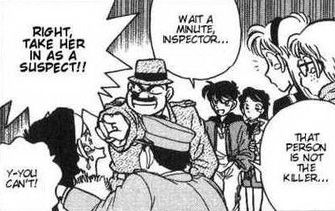 A character who is long on observational acuity and a bit short on connecting the dots. Named after Sir Arthur Conan Doyle's character Inspector Lestrade, who would always attempt to solve the case before Sherlock Holmes could, and always failed miserably. Where an Amateur Sleuth is involved, this character is nearly always a police officer because the Police Are Useless.

A good Lestrade, especially a self-aware one, can still be a valuable resource to their great detective, doing much of the legwork and research, as well as being a companion who has the legal authority to make arrests. Lestrade himself often acted like this in the later Holmes stories. A Lestrade might also be capable of dealing with most standard crimes, and only calls in the protagonist when he's confronted with something especially unusual that would be a better use of the protagonist's talents. An unhelpful one may become an Obstructive Bureaucrat, and one with a chip on his shoulder about the Sleuth being better able to do his job than he is. Particularly in earlier Holmes stories, Lestrade himself also had a bit of this in his character, though he got better with time: compare his portrayals in A Study in Scarlet and The Hound of the Baskervilles.

A common act of Genre Blindness faced by the Lestrade is for them to over-confidently and prematurely declare that the case is open-and-shut; obviously the dead person committed suicide, or the obvious culprit was the one who did it. Of course, whilst they're busy putting their feet up or throwing the book at an innocent person, the Sleuth is almost instantly discovering the clues that prove that the Lestrade is way, way off base.

Compare Friend on the Force, Sleuth Dates Cop, The Lopsided Arm of the Law. Not to be confused with Inspector Javert or Sympathetic Inspector Antagonist. See also The Commissioner Gordon, if superheroes are involved.