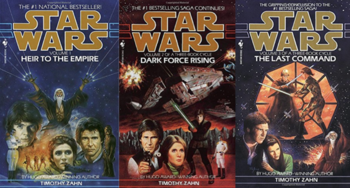 The covers for this trilogy were designed by the same man who did the posters for the Original Trilogy. Gotta love that.
Thrawn: It's the second piece of the puzzle, Captain. The piece I've been searching for now for over a year.
Pellaeon: I congratulate you. May I ask just what exactly this puzzle is?
Thrawn: Why, the only puzzle worth solving, of course. The complete, total, and utter destruction of the Rebellion.
Advertisement:

This trilogy was one of the cornerstones of the now non-canon Legends, being the first major work set after Return of the Jedi (five years after to be exact), the first truly popular entry of the franchise since Return of the Jedi, and serving as the introduction of some of the most beloved figures in Legends canon, like Grand Admiral

. Back before the Sequel Trilogy was made, many fans considered these stories to be the closest thing to an Episode VII, Episode VIII, and Episode IX that they would ever get. Years later, these stories are still regarded highly despite showing their age in some places.

Given the Big Bad is an alien, this trilogy introduced a slightly more human Galactic Empire — still certainly villainous, but no longer a 0% Approval Rating organization. In movie terms, it is somewhat closer to Admiral Piett and Captain Needa than Darth Vader and Grand Moff Tarkin. Thrawn himself (the aforementioned alien Big Bad) was certainly a Magnificent Bastard of the highest caliber, one whom the reader did not hesitate in respecting. The trilogy also reflected the Real Life movement into the Information Age, with Thrawn (and Karrde opposite him) being able to connect esoteric and obscure bits of data together into a much larger picture. Thrawn in particular was able to practice an almost obscene version of psychoanalysis on people and cultures by studying their artwork, using it to identify weaknesses in their thinking or perception patterns, and then exploiting said weaknesses in devastating ways. The trilogy, as implied by its name, concerns the adventures of the New Republic, particularly Luke, Han and Leia, to deal with Thrawn's plans, leadership and genius.

A comic-book adaptation of the trilogy was also produced, with six issues allotted per book. The art for Heir to the Empire is kind of

. The art for Dark Force Rising is much

, but it has problems of its own. The art for the last

is pretty decent; less realistic, but more expressive. The comics are a very Compressed Adaptation, with some pages having a Wall of Text and somehow still leaving out some important elements, but they do fairly well at sticking to the narrative.

For an idea of just how much of Legends canon got its start in these books, go here,

and note how many times the phrase "first appearance" comes up. These novels basically invented the New Republic that the Rebellion became. A few years later, Zahn wrote the Hand of Thrawn duology.

On June 21, 2011, the 20th anniversary edition of Heir to the Empire was released, including a new novella featuring Thrawn, Crisis of Faith

, and some interesting notes by Zahn himself on the process of the writing of the novel.

Thrawn appeared in Season Three of Star Wars: Rebels (voiced by Lars Mikkelsen) and in a new non-Legends novel by Timothy Zahn, making him the first major post-Jedi Legends character to be transitioned back into the new timeline.

In addition to the character and universe tropes it carries over from the Original Trilogy, this series provides examples of:

But it was so artistically done.