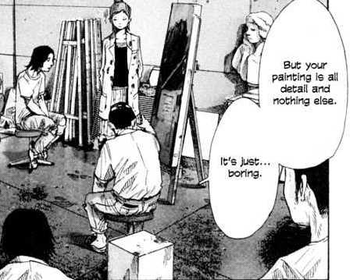 "Poetry is the shadow cast by our streetlight imaginations."
— Lawrence Ferlinghetti
Advertisement:

When an artist creates their works, they're putting at least a part of themselves into what they create. This can often indicate the artist's overall personality, attitude on life, or their general mindset at the time. Often times, other characters will notice and comment on what they see of the artist in their works. This exchange is not always positive, though, and people may see a lack of some vital part of the artist in their creations, or perhaps that the artist has only created with their head and not their heart. The opinions expressed may or may not make an actual change in the artist, but they'll often be taken to heart and dwelt upon.

Sister Trope to Clothing Reflects Personality, when you can read a person just by what they wear.

Compare Author Appeal, Author Phobia and Reality Subtext for specific ways in which the creator channels themselves through their work, and True Art Is Angsty and True Art Is Incomprehensible for general thoughts on the content of art.