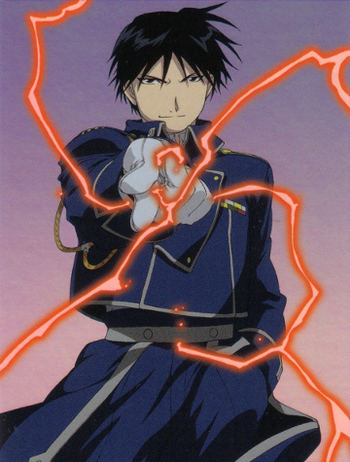 Colonel Mustang is about to dish out major pain.
Advertisement:

Although they often hold themselves apart from Muggles, the fantastical powers wielded by Wizards and Witches logically make them much sought-after by those in need of great power; and who is more concerned with developing and wielding great power than the military? In settings with little or no Fantastic Racism against magic-users, organized militaries may do just that, systematically seeking to recruit the mage down the street— or better yet, the entire Wizarding School across town— to help them fight their battles, often giving them formalized ranks and roles not unlike any other soldier.

Just what those roles are can vary, mixing and matching from a number of varieties:

Compare Super Soldier, which is someone specifically augmented by the military to make them a better soldier, Church Militant, which may employ these if Religion Is Magic. Compare Magic Knight and Mage Marksman, which involve magic-users also adept with conventional weaponry but who may or may not be a formal part of an organized military.