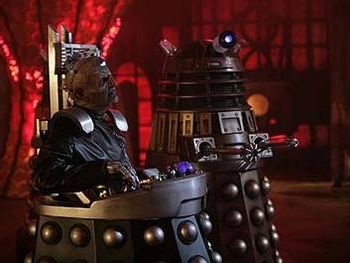 On the right: the Ultimate Life Form wearing a Hover Tank. On the left: its master, a blind guy in a wheelchair.
"You see, I never had the chance to serve in battle, nor did fate provide me the opportunity to sacrifice myself for humanity as it did for so many others in the Great War."
— The Director, Red vs. Blue
Advertisement:

The Big Bad, as everybody knows, is the source of conflict in a work of fiction, with their defeat being the main goal of The Hero which brings an end to that Story Arc. But, what exactly makes them such a threatening villain? Is it because Asskicking Equals Authority (and Authority Equals Asskicking)? If the protagonist is an Action Hero, he must be up against an unbeatable Action Villain, right? Well, not always. They could be extremely cunning, and able to manipulate others to do their bidding. They might be simply eviler than anybody else, willing to go to lengths others shy away from.

However, this villain has zero fighting ability. They might be elderly, disabled, or they fight well for a human but they're against a superpowered hero. Or they just think fighting is beneath them; that's what the hired help is for. In any case, what they lack in physical prowess they make up for in resources, cunning, and/or good PR. In the event they do encounter the hero one-on-one, they usually try to trick them into not attacking, just run for it, or they have the fight stacked in their favor by empowering themselves and/or weakening the hero.

If encountered in a video game, this character will either act as a deliberate Anti-Climax Boss, an outright Zero-Effort Boss, or even be The Unfought, unless they become empowered over the course of the game and go all One-Winged Angel.

Often overlaps with Evil Cripple and Dark Lord on Life Support, where the villain doesn't fight because they physically can't. Also compare The Man Behind the Curtain and Dragon-in-Chief; in both cases, the Big Bad is only nominally in charge while someone else is calling the shots. If The Dragon knows they’re the one truly in charge and decides to do something about it, he may become The Starscream. For Big Bads who have power but act like this until the climax, see Orcus on His Throne, where the Big Bad doesn't carry out any plans beyond sitting around being generally evil. This trope may result in It's Personal with the Dragon, as The Dragon doing all the heavy lifting may become the hero's personal Arch-Enemy.

While we can't name examples this is partly Truth in Television, as commanders are usually more well known for being a Magnificent Bastard, and even real life badasses aren't the One-Man Army that fiction tends to suggest.