Series / GARO: The One Who Shines in the Darkness 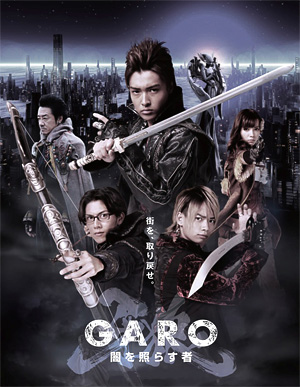 A 2013 tokusatsu series and installment in the GARO franchise, set in the far future after the first two seasons, featuring an entirely new cast of characters.

Vol City is an independent city-state which is often touted as a modern-day utopia with sleek modern utilities, virtually no crime and a super-low cost of living. However, behind the façade lies a terrible secret: the city is infested with monsters known as Horrors, which possess the weak-minded and feed upon human souls.

Protecting the city from the shadows are a ragtag group of rookie Makai Knights: Aguri Kusugami, a cold and analytical archer who bears the armour of GAI; Takeru Jakuzure, a free-wheeling playboy who controls the ZEN armour; and Ryuga Dougai, a brash and rebellious Anti-Hero who is the current successor to the title of GARO.

The Makai Knights discover that someone or something is transforming the most influential members of Vol City into Madou Horrors: a powerful new breed of Horror immune to their current methods of detection. Furthermore, the golden armour of GARO has been tainted black for reasons unknown, regaining its glow whenever Ryuga defeats a Madou Horror. With the aid of their mentor, the Makai Priest Burai, and his apprentice Rian, the three warriors must unravel the dark conspiracy at the heart of Vol City while learning what it truly means to be a Makai Knight.

A movie was released in 2015 starring Ryuga and Rian to serve as a sequel to this series, as well as another series to serve as a follow up to that. Both are titled GARO: Gold Storm Sho.