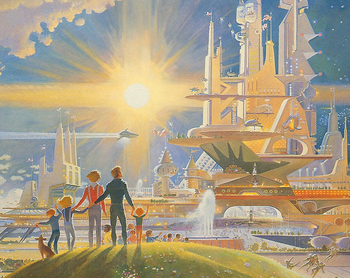 The Prologue and the Promise (crop), Robert McCall
Lev Grossman: Do you think of The Culture as a utopia? Would you live in it, if you could?
Iain Banks: Good grief yes, to both! What's not to like? ...Well, unless you're actually a fascist or a power junkie or sincerely believe that money rather than happiness is what really matters in life. And even people with those bizarre beliefs are catered for in the Culture, albeit in extreme-immersion VR environments.
— This

Any dictionary will give you this much:

Easy enough. Let's write one! First, you come up with a socially perfect place with a flawless political process. A little difficult, but you'll get there, sure... Now figure out what "moral" means well enough to refine it to an absolute. Hey, it was tough, but you came through in the end.

Now get everyone to agree with you.

Yeah. We can't help you with that part.

In fact, it is so much easier to get people to agree with what is wrong with a place that most social-commentary settings fall into the dystopia category. When a brave author does attempt a Utopian setting it seems to come from a need to grind a particular axe. Thus we get libertarian/conservative/progressive utopias, religious utopias, communal utopias, and other philosophic one-note offerings, each with its own collection of people attesting they would rather die than live there. It helps that the word itself was created to mean such a place can't possibly exist because it's that good.note The word is actually a pun; 'utopia' by itself means 'no place', but is pronounced identically (in English at least) to 'eutopia', meaning 'good place'.

The downfall of a utopia in the main character's eyes will most likely be seeing the inevitable, thorough suppression of individuality. How else could everybody get along all the time? Even in individualistic utopias, the supposedly rugged individualists who compose the perfect society have a suspicious tendency to agree on everything (or at least everything political) and act in similar ways. The end of violent conflict seems to require uniformity.

See also Perfect Pacifist People and Utopia Justifies the Means. Contrast with (of course) Dystopia. May run on Aesoptinum. Crapsaccharine World can be a subversion or a deconstruction of this trope. False Utopia is a mix of both sides: all the looks of a utopia, but all the problems of a dystopia to maintain it.

For the eponymous book by Thomas More, see here. If you're looking for the British drama series of the same name, see here, or for the Australian comedy series, see here.