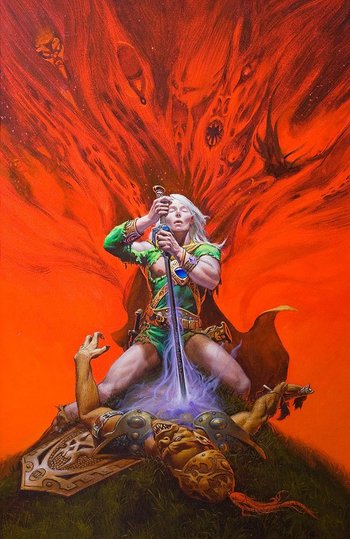 Arioch! Arioch! Blood and souls for my lord Arioch!
"I have this feeling that my luck is none too good.
This sword here at my side don't act the way it should.
Keeps calling me its master, but I feel like its slave;
Hauling me faster and faster to an early, early grave;
And it howls! It howls like hell!
I'm told it's my duty to fight against the Law;
That wizardry's my trade, and I am born to wade through gore.
I just wanna be a lover, not a red-eyed, screaming ghoul.
I wish it picked another to be its killing tool."
— "Black Blade", Blue Öyster Cult
Advertisement:

Originally a six book series by the influential fantasy author Michael Moorcock, the story follows its title character, Elric of Melniboné, in his journey from a sickly sorcerer-king of a decadent and corrupt empire to a top class warrior involved with the affairs of the gods of Law and Chaos. His iconic weapon is Stormbringer, one of two evil demonic runeblades that feast upon the souls of those their wielders slay with them, have wills of their own, and tend to take over their wielders on occasion, which leads to the tragic deaths of pretty much everyone Elric holds dear.

The series contains numerous novels and short fiction, not written in the same order as the internal chronology. Several of the Elric novels are fix-ups of short stories published years or decades earlier.

Anthologies Including Work by Other Authors

And yes, Fullmetal Alchemist fans, the Elric brothers from that series are indeed named after Elric of Melniboné.

"Farewell, friend. I was a thousand times more evil than thou!"