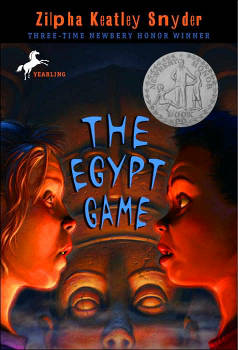 That was the way with all of the Egypt Game. Nobody ever planned it ahead, at least, not very far. Ideas began and grew and afterwards it was hard to remember just how. That was one of the mysterious and fascinating things about it.
Advertisement:

The Egypt Game is a classic 1967 children's novel by Zilpha Keatley Snyder. It won a Newbery Medal in 1968.

Set in a California college town, The Egypt Game follows the adventures of a group of kids who become utterly fascinated with Ancient Egypt and create an imaginary world where they can live out their own rituals and dramas. This all takes place in the backyard of the local Misunderstood Loner with a Heart of Gold, known only as the Professor. But all is not well in their neighborhood when two children are murdered and everyone thinks the Professor is behind it. (You didn't think a Newbery book would be free of death, did you?)

It was followed by a Sequel, The Gypsy Game, published thirty years after the original.