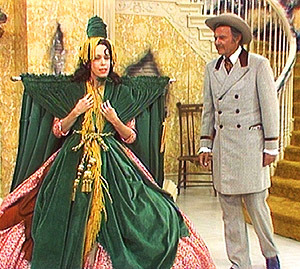 "I saw it in the window and I just couldn't resist it."
Advertisement:

A character is in dire need of some new clothing, but short on materials — so she converts the curtains (or some other unconventional item, such as a tablecloth or a sail) into a new outfit.

If played for comedy, expect to see the exact silhouette of the outfit in the still-hanging curtains — and possibly only enough for a two-dimensional version. Do not try to work out how that's possible. Another option is for the outfit to still look like a window dressing, complete with the poles and strings.

Robert gets upset when he sees that Giselle cut apart his curtains to make herself a dress.

Robert gets upset when he sees that Giselle cut apart his curtains to make herself a dress.