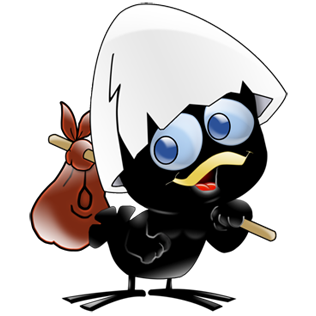 It's the latest in hats this season.
"Snorlax is pretty lazy... but Togepi hatched, got halfway out of his shell and just said, 'Fuck it.'"
— Pokémon meme

A creature only partially hatches from an egg, and walks around with the remaining eggshell on him/her as though it was normal. It could be as little as wearing part of the shell as a hat, or as much as an egg with feet poking out.

Reasons for this are usually either Rule of Funny or Rule of Cute.

Contrast Removable Shell (the shell that's supposed to stay on can come off).