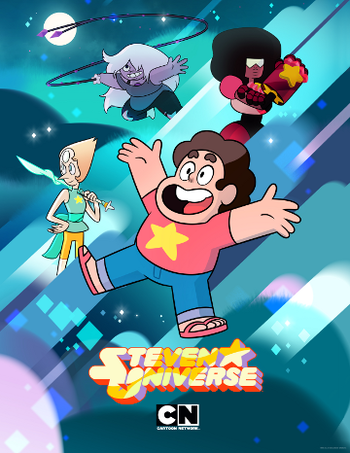 Believe in Steven.note Clockwise from bottom: Steven Universe, Pearl, Amethyst, and Garnet.
"We... are the Crystal Gems, we'll always save the day,
and if you think we can't, we'll always find a way!
That's why the people of this world believe in
Garnet, Amethyst, and Pearl - AND STEVEN!"
— The theme song
Advertisement:

Steven Universe is a Cartoon Network show from Rebecca Sugar, an Adventure Time alum and author of Pug Davis. It is the network's first series to be created and headed solely by a woman and an openly LGBT individual.note The first animated show with a lone female creator credit was Arlene Klasky with Santo Bugito; the first Cartoon Network show to be created by a woman was My Gym Partner's a Monkey, which was done by husband-wife team Timothy and Julie McNally Cahill. Sugar's the first woman to head a CN show solo.

Debuting on TV on November 4th, 2013, the series follows the Coming of Age adventures of a boy named Steven, the youngest of the Crystal Gems, a team of magical crystalline aliens. Steven may not be as powerful or savvy as the other Crystal Gems, and he may not have much control over his powers, but that doesn't stop him from joining Garnet, Amethyst, and Pearl on their magical adventures and finding a way to save the day. As the story continues, Steven starts to find out what exactly they're saving the day from, and the plot comes to encompass much more than just one sleepy beach town...

Steven Universe has had a (non-canon) Crossover episode with — of all shows — Uncle Grandpa. Garnet also featured in two episodes of OK K.O.! Let's Be Heroes, first as one of the main characters in the episode "Crossover Nexus" and then as a cameo appearance in that show's finale.

The show ended after five seasons with the one-hour episode, "Change Your Mind", on January 21, 2019. A Made-for-TV Movie taking place two years after its events, entitled Steven Universe: The Movie, aired later that year on September 2. The series and movie were then succeeded by Steven Universe: Future, a 20-episode epilogue miniseries that began on December 7, 2019, and concluded on March 27, 2020.

The series has a substantial amount of spin-off media detailed on the Franchise page.

There is a recap page, as well as a Best Episode Crowner.

Warning: Unmarked spoilers ahead. Proceed at your own risk!

If every trope page were perfect, we wouldn't have indexes!

"If I could
begin to be,
Half of what
you think of me,
I could do about anything,
I could even learn how to love
Like you"
Feedback

Example of:
Rage Against the Reflection