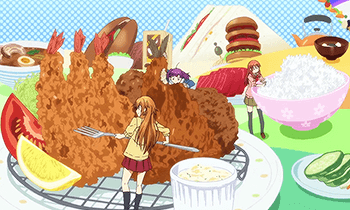 "These donuts are as big as Buicks!"
—Roy as an animated mouse, Stay Tuned
Advertisement:

A staple of kids' media. A fantasy of either becoming small or being in a land of giants, and coming across a table full of food. Appeals to the greedy kid in us all.

The archetype would be "Jack and the Beanstalk".

or the other US mid-Atlantic regional supermarket chain.

note Just to confuse things more, both of 'em are owned by the same company, a Dutch grocery specialist called Ahold.

Compare Level Ate which is likely constructed out of Giant Food, and also compare Mountain of Food, in which the food is normal-sized but the amount is what's giant. Someone might also imagine giant food via a Delicious Daydream.

Farmerbory has grown a massive peach for the Borytown Peach Festival.

Farmerbory has grown a massive peach for the Borytown Peach Festival.