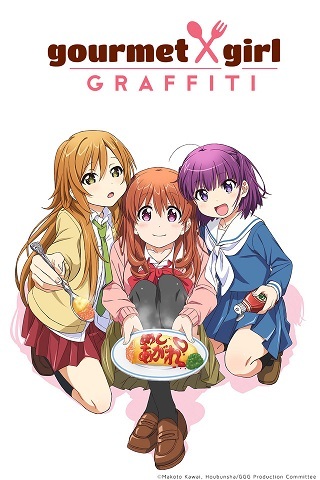 Ryou Machiko is the quintessential Minor Living Alone. Her parents left her on a business trip when she was eight, entrusting her to her grandmother. But after Ryou's grandmother's recent death, she has been living and cooking on her own, and compares herself unfavourably to grandmother's cooking. It's at this time her cousin Kirin Morino started staying in her apartment during weekends to attend the same art-stream Cram School Ryou attends, and later Shiina, another Cram Schoolmate, also joins in. How does this help with Ryou's loneliness—and cooking?

Gourmet Girl GraffitiOther Titles The original title romanizes to Koufuku Graffiti, Studio Shaft uses this as the romaji title of the Animated Adaptation while the author opts for Happy Cooking Graffiti as the romaji title of the manga is a yonkoma by Makoto Kawai, which was serialized in Manga Time Kirara Miracle! from 2012 to 2016. It also received an animated adaptation during the Winter 2015 Anime season by Studio Shaft.

for folks living in the US and Canada.