Film / Honey, I Shrunk the Kids 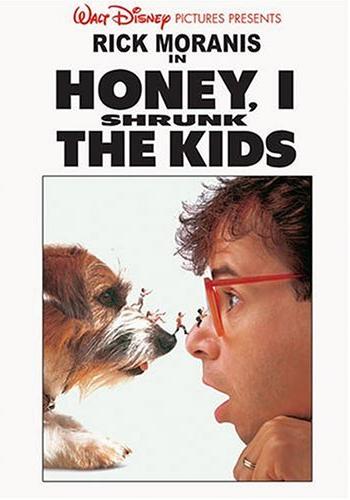 "They're never going to believe this at school."
—Ron Thompson
Advertisement:

Honey, I Shrunk the Kids is a 1989 American science fiction comedy film. It was co-written by Stuart Gordon and Brian Yuzna (both of Re-Animator fame), and directed by Joe Johnston (in his directoral debut).

Take equal parts of an unlucky scientist one step away from becoming a Mad Scientist, and a potential Weapon of Mass Destruction applied on four children, then top it off with the angst of said children. It is a comedy.

Stay-at-home inventor Wayne Szalinski (Rick Moranis) invented a shrink ray. Which doesn't work. Yet. Due to a stray baseball it becomes fully functional and promptly shrinks his daughter, son and the neighbor's two sons. Wayne was absent, and is unaware that his machine worked. After the idea of his machine is dismissed at a conference, Wayne breaks it in frustration, sweeps the broken glass up as well as the children, and then deposits them on the curb for trash collection. They cut their way out with a shard of glass, and begin an adventure across the unkempt lawn to get back home and unshrunk. They face many environmental hazards such as a bee, a scorpion, sprinkler system, automated lawn mower, and a cat, all of which are now infinitely more dangerous as the kids must learn to band together in order to survive... yes, we assure you this is a comedy. Meanwhile, Szalinski realizes the error of his ways, that the machine works and had accidentally shrunk the kids, and tries desperately to both fix the machine and find the kids in the grass in the yard.

Characters in the movie include:

There are several follow-ups focusing on the further adventures of Wayne and his family.