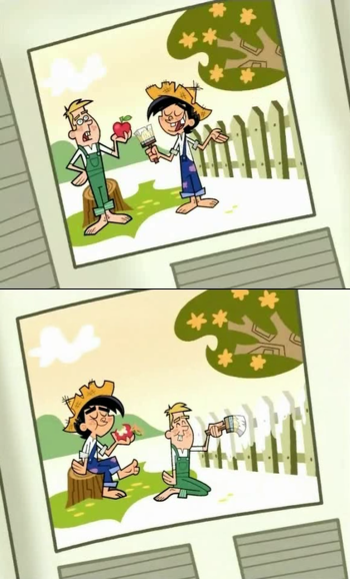 Today's Tom Sawyer, he will ply on you
And these trades he is making get by on you
Calvin: Can I run the vacuum cleaner?
Calvin's Mom: No. Not until you're older.
Calvin: I'm old enough! I could do it!
Calvin's Mom: Well, maybe just this once, if you do a good enough job.
Calvin: [vacuuming] That suppressed smile worries me.
— Calvin and Hobbes
Advertisement:

Bob cons others into helping him with a tedious, thankless, or otherwise unpleasant task. Usually, Bob was meant to do the chore himself, and runs this con to drop the work onto another person's shoulders. The victim may or may not realize that he's been had.

How Bob pulls off this impressive social feat varies. Reverse Psychology is popular, as is pulling a Bavarian Fire Drill, or making a Chain of Deals (but anyone with enough guile to do this usually has many tricks up his sleeve). If the "fence" is a dangerous or potentially lethal thing to "paint," Bob might appeal to the victim's sense of honor, pride, nobility, or religion while simultaneously downplaying the risks involved.

Notable Fence Painting activities include being in a Mad Scientist's experiment, any Deal with the Devil, or joining a war against a country you didn't even know existed. Or painting a fence.

Based on the famous whitewashing scene in Mark Twain's The Adventures of Tom Sawyer, where Tom not only tricks the local kids into doing his chore for him, he convinces most of them to pay him for the opportunity. This makes it Older Than Radio.

Compare Stone Soup, Wax On, Wax Off, and Briar Patching.

To get out of Br'er Fox's trap, Br'er Rabbit tricks Br'er Bear into taking his place in the snare by saying he's making a dollar a minute keeping the crows out of the cornfield.

To get out of Br'er Fox's trap, Br'er Rabbit tricks Br'er Bear into taking his place in the snare by saying he's making a dollar a minute keeping the crows out of the cornfield.