Webcomic / No Rest for the Wicked 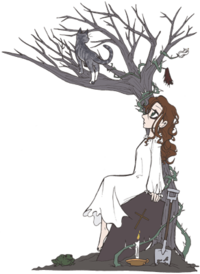 No Rest For the Wicked

is a Web Comic by Andrea L. Peterson set in a world where many Fairy Tales are true, in all their grim glory.

Some are Fractured Fairy Tales, but that does not prevent them from being as grim as the originals.

The main plot features the insomniac Princess November from "The Princess and the Pea" setting out to save the moon, buried as in the fairy tale "The Dead Moon.

" She gathers a Ragtag Bunch of Misfits about her from various tales, and they encounter more fairy tale characters along the way.

Other included fairy tales are "Puss in Boots," "Diamonds and Toads,

" "Little Red Riding Hood," "Beauty and the Beast," "Hansel and Gretel," "The Girl Without Hands,

" "Sleeping Beauty," "The Boy Who Set Out to Learn What Fear Was

Unfortunately, it appears to be an Orphaned Series, as it hasn't been updated since February 28, 2013.