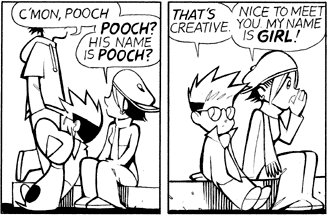 "If I'm Beetle and you're Monkey, why isn't he called Boy?"
— Beetle, Kubo and the Two Strings
Advertisement:

Some completely uncreative owner has decided the family pet will be known as Dog. Or, perhaps, a similarly uncreative author names their feline character Kitty. Alternately, the creature in question does have a less Shaped Like Itself name, but for whatever reason, Alice the Pig prefers to go as Piggy. Usually but not always applied to animals; robots imaginatively named Robot and the like are part of this trope, too. Remarkably common in children's shows, despite the obvious problems it should theoretically cause.

One might show a touch more flair by naming something what it is in a foreign language, like a lion named Leo.

A subtrope of Shaped Like Itself. Pokémon Speak is a closely-related trope where something's named for the sound it makes. Everyone Calls Him "Barkeep" is another closely-related trope where a character is only known by their job title. Race-Name Basis is when someone thinks every dog is named "Dog". See also Species Surname ("Dog Smith" is A Dog Named "Dog", "Bob T. Dog" is Species Surname), Namedar, A Lizard Named "Liz", A Pig Named "Porkchop", A Dog Named "Cat" (if the animal is named after a different species than its own). Compare and contrast Egocentric Team Naming. If the cast is full of these, it's Animal Theme Naming. If a character's species is named after the character's name, it's A Kind of One.

Note that robots also have their own trope. This trope name itself uses A Noun Referred to as X.

It gets even sillier later.