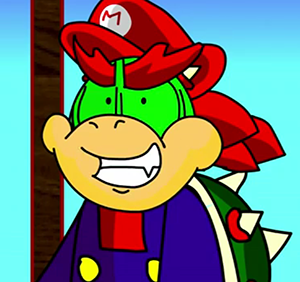 What's the best disguise in a ship full of Koopas?
Advertisement:

A Day With Bowser Jr is a Super Mario-based webtoon that focuses on the adventures of Bowser Jr, Bowser's son and heir to the Koopa Throne.

His adventures include battling against Nerdy, his Mario-obsessed and Koopa-hating classmate, and Ludwig Von Koopa, his jealous older brother.

The series was created by YouTube user Dannywaving. The YouTube channel on which A Day With Bowser Jr runs can be found here.