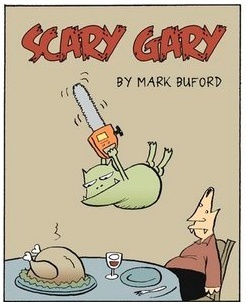 Scary Gary is a Newspaper Comic written by Mark Buford, which debuted in several newspapers on June 16, 2008. Scary Gary follows Gary, a recently retired vampire who tries to live peacefully in the suburbs with his demonic henchman Leopold, a Bedsheet Ghost named Owen, and severed Head-in-a-jar Travis. The series is something of a Slice of Life that mostly runs on large doses of Black Comedy, which is often provided by Leopold, although he's not the only monster around causing mayhem & destruction.

The comic can be read online here