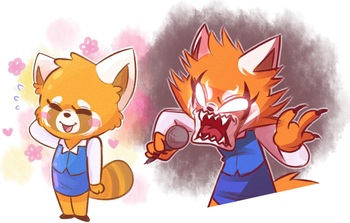 Left: The outward projection of your everyday employee.
Right: The Hell-shattering rage she suppresses on a daily basis.
Image

. Used with permission.
"He's internalising. I love it when he's Mister Volcano."
— Missy, Doctor Who, "The Doctor Falls"
Advertisement:

Everyone has a limit, but long before they reach that point, the seething anger inside them will begin to seep, then trickle out in increasing ferocity until they just can’t hide it anymore.

In short, this is where a character cannot or will not express their feelings, so they try to let it out a bit by being... overenthusiastic about whatever they're doing.

This may be because the person annoying them is their boss, or if they are trying to appear professional in, say, a law court to avoid Courtroom Antics. Alternately, our hero could be taunted by a villain who would gain from his anger, such as a certain Naboo senator and future galactic emperor.

Not exactly like Tranquil Fury. There, someone is being angry in a very calm way. Here, someone is trying to appear calm by suppressing their anger (though it is not necessarily anger; it can be any kind of emotional distress that causes destructive feelings), but doesn't quite succeed.

Related to Yanderes and Cute and Psycho characters, who look nice but are completely insane on the inside rather than simply upset, though they can have moments of this when the cracks in their nature start to show. Stepford Smilers have this long term and are much better at hiding their feelings.