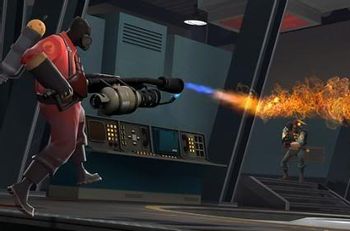 Need a light?
"We have flamethrowers. And what this indicates to me is that at some point someone said to himself, 'Gee, I'd sure like to set those people on fire over there, but I'm way too far away to get the job done. If only I had something to throw flame on them.' And it might have ended there, but he mentioned it to his friend—his friend who was good with tools. And about a month later he came back, 'Hey, quite a concept!'" FWOOOSH.
— George Carlin
Advertisement:

Sometimes, you have an opponent, structure, device or other target which you have just got to kill with FIRE. If you have to do this multiple times, you would wish you have an actual weapon which can burn things for you instead of rigging something on the spot all the time.

You will need the Fire Breathing Weapon; a gun-like weapon which creates fire. Pull the trigger and a gout of fire will appear, covering your target in burny goodness. Most games use a form of directional Splash Damage to implement this.

Of course this is not limited to the flamethrowers alone: various (directional) bombs, traps, improvised weapons and even vehicle cannons can fall under this category. The common similarity between all the weapons here is they all use "Kill It with Fire" as their main form of causing damage, and they are all "point and burn" weapons.

Weapon of choice for the Pyromaniac. Sometimes used for lighting cigarettes.

PS: If you use this weapon on your target, and it stands up uninjured yet on fire and quite pissed off... well, it's nice knowing you.