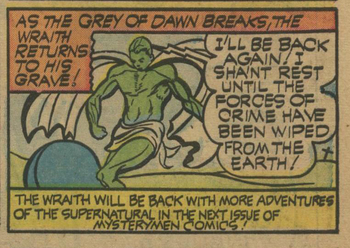 The Wraith is a Superhero from The Golden Age of Comic Books, created by Paul Devlin and published by Fox Feature Syndicate in Mystery Men Comics #27-31.

Gary Kennedy is a young cop gunned down with his brother by a gang of criminals. As he died, Gary vowed revenge. He was able to get his vengeance after being resurrected as a ghost, and went on to fight evil as the Wraith.

Despite the similar premises, this is not to be confused with the film.