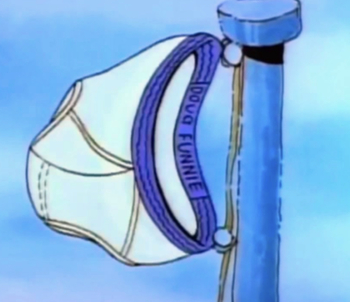 "I pledge allegiance to the Flag of Tidus Whitus, and to the Republic for which it stands..."
"Who's flag is it supposed to be? Knicker-ragua's?"
— The Brigadier, Carry On England
Advertisement:

A very common prank among school-age children is to pilfer underpants from someone and hang it from a flagpole like a flag. The underwear will often be Goofy Print Underwear. Instances where the wearer is not removed from the underpants first count as a Wedgie.

Compare Comedic Underwear Exposure, which is something similar on a person. Not to be confused with Flag Bikini, which is swimwear or underwear in the color and pattern of a national flag. See also Panty Thief, who steals and keeps underwear for (usually) perverted reasons.