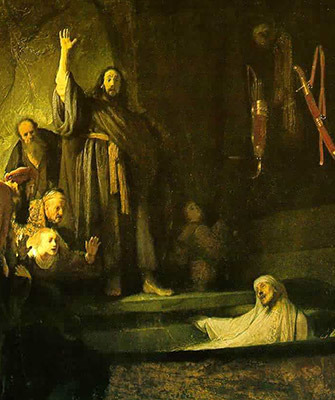 The form of afterlife can vary pretty widely. They may "simply" be resurrected or reincarnated (usually as a sentient pet animal), physical or mental alterations (good or bad) optional; or we may now have a ghost, vampire, zombie, angel, godling, demon, haunted car... okay, that last one will be hard to top (except with a Love-matic Grandpa!). Bringing someone back from the dead by supernatural means is generally treated as being a negative thing because of how unnatural it is.

This is exceedingly common in American superhero comic books, to the point that whenever a popular character dies, it's a given that they'll be back within no more than five years. At one time, it was said that "Nobody ever stays dead in comics, except Bucky, Uncle Ben and Jason Todd." Naturally, since that phrase was coined, Bucky and Jason Todd have both been recalled to life.

A general rule of thumb is that if you Never Found the Body, the character is Not Quite Dead in the first place (and therefore not a candidate for this trope). One of the most common examples of this is that if a character falls off of a cliff or other high structure, especially into water, they're almost guaranteed to still be alive; see Disney Death. An explosion gives more reasonable odds. Of course, even if you've see the body and you've atomized it so finely that each individual molecule is a galaxy apart... there's always Time Travel. Removing the entire thing from existence can be done, and equally undone by a similar Deus ex Machina.

Real life examples are not included here; while people thought to be dead — and even legally or medically "declared" dead — have occasionally been revealed to be alive, or been resuscitated by a pioneering new medical technique, that just means they were never really dead to begin with. Resurrections described in religious texts should go in the "religion" section for the avoidance of argument, while reincarnation has its own page.