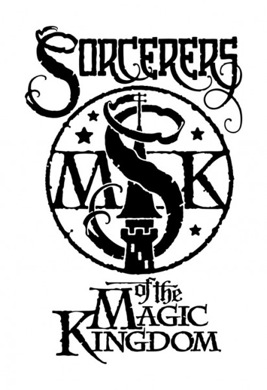 Use the Sorcerers Crest!
Advertisement:

Sorcerers of the Magic Kingdom was a Disney-themed Collectible Card Game that could be found at the Magic Kingdom in Florida. The plot of the game is that Hades wants to overthrow the Magic Kingdom so he can make it into his summer home, but the only thing that can stop him is Merlin and a magical crystal called The Crystal Of the Magic Kingdom. He sends his minions to steal it from Merlin, but it gets shattered in the process. Now Hades is recruiting some of the Disney Villains (Cruella de Vil, Dr. Facilier, Yzma, Maleficent, Ursula, Governor Ratcliffe, Scar and Jafar) to get the shards before Merlin, and it's up to you, the player to aid Merlin and recover the pieces of the crystal.

The game was played by finding various interactive portals scattered about the park. You are armed with special cards based off Disney characters, and by simply holding them up, you can activate the portal and use them to perform tasks. Tasks range from fighting a villain or using the back of the card to activate a spell that's needed at the time.

The game spanned across every land in the Magic Kingdom except Tomorrowland. You had to physically locate the portal in the park and then activate it. Once you do, you're put on a certain story track until you defeat the villain before moving onto the next villain. Defeating all the villains will put you in one final story arc wherein you go after Hades.

Sorcerers of the Magic Kingdom provides examples of the following tropes: