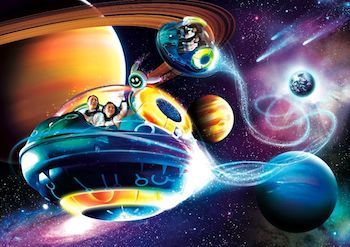 Space Fantasy: The Ride is an indoor roller coaster at Universal Studios Japan that takes guests on a thrilling ride through space.

The ride's storyline starts with Solar Princess Kosumia contacting the guests and informing them that the entire universe is at risk due to the sun's energy beginning to run out and that she needs their help in restoring it. From there, guests board a special space vehicle that contains the Stardust energy needed to re-energize the sun, and then embark on an adventure that takes them past sights like different planets, starfields, and meteor showers.

The coaster opened on March 18, 2010, in place of E.T. Adventure. Throughout certain times of the year, the coaster is closed down and used for the park's Universal Cool Japan event, where via virtual reality helmets, the ride is given an overlay based on a popular domestic property.