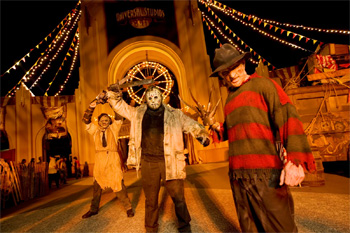 Prepare to run like the dickens in 3...2...late.
"Dying for a good Halloween party?"
Advertisement:

Halloween Horror Nights is one of the largest annual Halloween events in the world. Halloween Horror Nights is hosted by the Universal Studios theme parks in Orlando and Hollywood every year, with Singapore and Japan joining the yearly fun in the 2010s. The event usually runs from the start of September to the end of Octobernote occasionally extending to the first day or two of November. While the Orlando event is the biggest, all events revolve are several key similarities: haunted housesnote sometimes referred to as mazes, though they all have a predefined path, scarezonesnote sections of the park themed with props and effects and populated with actors, and shows. The houses and scarezones are populated with "scareactors", dressed in costumes and makeup and positioned to scare the bejeezus out of passerby.

Halloween Horror Nights actually began in 1986 at Universal Hollywood; after a grisly accident where a scareactor was run over by a tram, Hollywood canceled the event. Universal would not revive their Halloween events until Orlando (to compete with the local "Terror On Church Street" haunt) introduced Fright Nights in 1991, an event that lasted for one weekend in October and included one house, The Dungeon of Terror, and a large number of shows, musical acts, and street performers. Fright Nights was massively popular, with the house achieving wait times of over 2 hours, and the name was changed to Halloween Horror Nights in 1992. '92 also saw the introduction of the Bill & Ted's Excellent Halloween Adventure show, which continued on every year until 2017.

The event has only grown since then: in 2019 at its peak, for Orlando's Halloween Horror Nights 29, there were 10 houses, 5 scarezones, and two shows. The event has gone from running a mere three nights to, at its 2019 peak, running 42 select nights from September 6 to November 2. The biggest competitor for the event at the moment is Howl-O-Scream at Busch Gardens. Hollywood's event would eventually catch back up with the Orlando event in terms of scope and has been well received by fans and by the creators of the franchises that Hollywood bases their mazes on. Hollywood's event is under the direction of John Murdy, who originally worked on the Orlando event, who is known not only for his fan interaction but his ability to get the biggest names in horror to contribute to the scares. The biggest competitor for Hollywood at the moment note in fact, Horror Nights kicked off in 1986 to compete directly with them is Knotts' Scary Farm.

As a Universal Studios event, houses and scarezones based on movies are quite common, to the point where 2009's Orlando event included 6 movie houses out of 8 total. Universal Hollywood often has almost exclusively film-based events beginning in 2006, and House of 1000 Corpses even got its start as a Hollywood house. It does have the occasional original property, however, such as La Llorona in 2011note which got a sequel house in 2012 and a house at the Orlando event in 2013. One of the key points of the Orlando event is its use of icons: beginning with the Crypt Keeper in 1995, there's been a number of icons (as well as a great many unused concepts) that have been used to provide a face for the year. Orlando also uses the event website to expand upon the backstory of the icons, houses, and scarezones for each year, often mixed in with games (such as "Horror Unearthed" which had an online and an in-park component and the Alternate Reality Game Legendary Truth).

Hollywood's event is predominantly movie-centric, and as such, doesn't have Icons and focuses on characters from the house/scarezone properties in the event and marketing. note Despite Hollywood's focus, Orlando icons have appeared at the 2006 and 2007 events, although only one of them (The Director) served as an Icon in the traditional sense. While the Director is notable for being the first Icon to have served in full capacity at Orlando, Hollywood, and overseas in Singapore, the first Icon to have the honors of going overseas is The Caretaker for the shortlived HHN event in Spain back when Universal still owned the PortAventura theme park. One of the other distinctions that Hollywood had over Orlando is the Terror Tram, which goes through many of the same sights as the distinctive Studio Tour... only for one reason or another, guests were forced off the tram and onto the the Backlot sets, with rethemed paths and scareactors galore. However, this aspect of the event was discontinued in 2019.

Due to the COVID-19 Pandemic, both the Orlando and Hollywood events were canceled due to safety concerns involving the event due to it's close up and interactive nature. 2020 would have been the 30th year for the Orlando event. More details about the cancelation can be found here.

Though the event proper was cancelled, Orlando would still put on three houses for daily visitors with social distancing parameters in place, consisting of Revenge of the Tooth Fairy, Universal Monsters: The Bride of Frankenstein Lives! and a last minute Beetlejuice house running only on Halloween and November 1st.

Universal Studios Singapore and Universal Studios Japan both have their own versions, with members of the Orlando event's Art & Design Team providing guidance. Singapore's event weaves in both common Horror Nights staples (the use of Icon characters and common HHN maze/scarezone themes) mixed in with haunted attractions based in Singaporean culture. Japan's event started with a focus on licensed properties such as Friday the 13th and The Mummy, along with J-horror mainstays Ring and Ju-on. It gained mainstream gaming media attention in 2012 for its Resident Evil scarezone, complete with appearances

. It's also notable for having the first "extreme" house in the event's history worldwidenote "Extreme" houses differ from regular haunted houses due to being a more "personalized" horror experience. Usually it means guests have to go in alone or with a small group and they have to sign up for it in advance, including legal waivers. There's a lot of focus on sensory deprivation and, most notably, a lot of the rules that scareactors would usually have to follow are off the table including them not being able to touch you. HHN Orlando has had ideas for extreme houses for years but they've never made it to the events themselves. Orlando's 2016 upcharge experience, The Repository, is the closest to an extreme house the event has had... but while the experience was more personal and the scareactors could touch people, it wasn't any scarier than a regular house., with 2015's Trauma.

Information about the Icons and other original characters created for the event can be found at the (still heavily under construction) Characters page. A partial list of some of the many multimedia properties that Horror Nights has adapted over the years can be found under the Trivia page. Feel free to help out with the Characters page and with crosswicking the tropes.

The event is so popular it has its own wiki

A couple gets into a photo booth only to be menaced by Jack the Clown himself.

A couple gets into a photo booth only to be menaced by Jack the Clown himself.