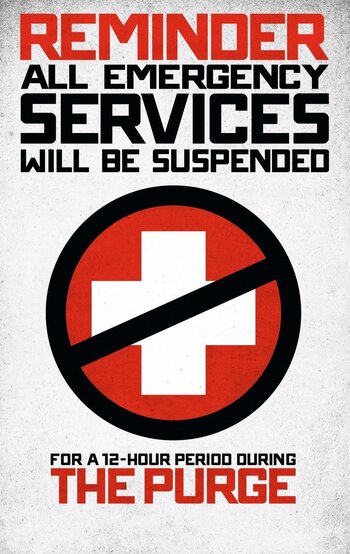 Let us purge.
"This is not a test. This is your emergency broadcast system announcing the commencement of the Annual Purge sanctioned by the U.S. Government. Weapons of class 4 and lower have been authorized for use during the Purge. All other weapons are restricted. Government officials of ranking 10 have been granted immunity from the Purge and shall not be harmed. Commencing at the siren, any and all crime, including murder, will be legal for 12 continuous hours. Police, fire, and emergency medical services will be unavailable until tomorrow morning at 7 a.m., when The Purge concludes. Blessed be our New Founding Fathers and America, a nation reborn. May God be with you all."
— Purge Emergency Broadcast System
Advertisement:

The Purge is an American Action Horror franchise, spanning both feature films and a TV series.

The series was mainly created by James DeMonaco, who was partially inspired by the Star Trek episode, "The Return of the Archons". It is produced by Blumhouse Productions and Platinum Dunes Productions, with Universal Studios distributing the film series theatrically, with a tie-in tv series airing on the USA Network.

The franchise presents an Alternate Timeline, set in the seemingly near-utopian, crime-free America in the near-future. This presumed peace and prosperity is attributed to a new, radically conservative political party, the New Founding Fathers of America (NFFA), who came to power in 2014, and began a tradition of a national event called Purge Night, or "The Purge". Under this new tradition, a twelve-hour period is enacted annually, in which all crime, including murder, becomes legal. However, in actuality, America has become a totalitarian dystopia, the seeming prosperity and security are nothing but propaganda, and the Purge is not all that it seems...

The entries in the series, in order of release, include:

If you are looking for the Fan Film, which is outside of the official canon, see The Purge: Survival.

If you are looking for the parodies of the film, see the 2016 film Meet The Blacks and the 2020 film The Binge.

The Emergency Broadcast System announcing the commencement of the annual Purge Night, where all crime, including murder, becomes legal within a twelve-hour period.

The Emergency Broadcast System announcing the commencement of the annual Purge Night, where all crime, including murder, becomes legal within a twelve-hour period.