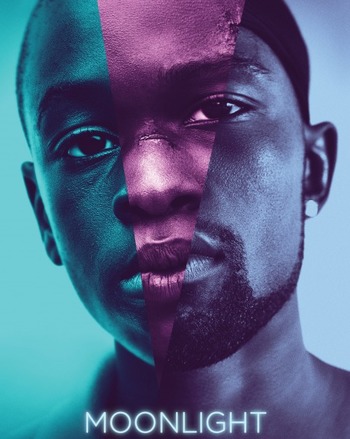 The story of a lifetime.
"Who is you, Chiron?"
— Kevin as an adult
Advertisement:

The film is largely centered around a boy named Chiron, and follows his burgeoning sexuality and his life in Miami, starting as a shy child (Alex Hibbert), continuing as an awkward teenager (Ashton Sanders) and ending as a hardened adult (Trevante Rhodes). These stages of his life are presented in three acts, each one named for Chiron's preferred name at that point: Act i: Little; Act ii: Chiron; Act iii: Black.

Among its many accolades, Moonlight was nominated for eight Academy Awards, winning for Best Picture, Best Supporting Actor (Ali), and Best Adapted Screenplay (Jenkins and McCraney). Infamously, it was subject to the most notorious mix-up in the history of the ceremony, as an envelope switch resulted in La La Land being announced as the Best Picture winner before the latter film's producer Jordan Horowitz announced the mistake. Quite a lot of coverage of the awards focused more on the mistake than on the film itself, which garnered a fair amount of criticism in return.

Moonlight is the first film with an all-black cast, the first LGBT-themed film, the second-lowest-grossing film domestically (adjusted for inflation, behind The Hurt Locker), and the lowest-budget film (adjusted for inflation) to win the Best Picture Oscar. (After its awards win, it eventually rose to a $28 million domestic and $65 million worldwide gross, outdrawing its budget by at least sixteen times and possibly as many as forty-threenote some sources have cited its budget as $1.5 million and others as $4 million).